Incredible Kelp, Keystone of the Environment

We’re in love with all things kelp here at Cape RADD. We love kelp and we love lookin’ at it. Kelp forever!

That’s why we loved this new Open-Access article published Tuesday in the journal Functional Ecology.

So, what did they find? Let’s start with some background.

We call kelp a keystone species because its presence alters the surrounding habitat. In South Africa, kelp is a primary producer that provides shelter and food for a number of species like the Cape Sea Urchin and Abalone. Some of our research aims to identify the sensitivity of kelp to the effects of climate change. In parts of the world, warmer temperatures have led to range expansions of urchin species that graze on kelp. This, coupled with overfishing of the rock lobster – a primary predator of these urchins, has resulted in a decrease in kelp cover as more urchins are consuming more kelp. 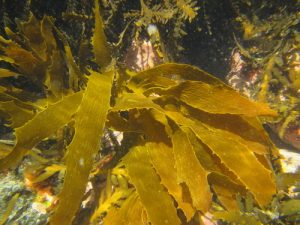 Interestingly, kelps in South Africa don’t seem to be experiencing the same decline and are actually expanding in range. But I digress, this article isn’t actually about kelp declines, but about kelp’s potential ability to buffer the effects of ocean acidification, as a result of climate change!

The ocean is a giant carbon sink that absorbs and stores carbon dioxide from the atmosphere, absorbing more that 25% of the carbon dioxide that we put into the atmosphere. This process acts to mitigate the immediate effects of climate change, but produces carbonic acid as a by product.The carbonic acid eventually dissociates into its component ions which increases ocean acidity, a process we call ocean acidification.

There are a number of consequences to marine life as a result of ocean acidification, and one of the largest is its impact on calcification. Many marine species with shells and exoskeletons, like coral, rely on a balance of carbonate ions in the ocean to produce the calcium carbonate that their shells and skeletons are composed of. A process that is hindered by ocean acidification.

We all remember the photosynthetic process, right? The Calvin Cycle? Kelp is a photosynthetic organism and recall that in this process, plants absorb carbon dioxide, water and sunlight to produce oxygen. The authors here hypothesize that the absorption of carbon dioxide during photosynthesis creates a very thin buffer layer on the surface of kelp where the effects of ocean acidification might be lessened. A layer thin enough to serve as refuge for calcifying species like moss animals (bryozoans). And this is exactly what they found!

Kelp rules! That’s what I say.

Have you spotted Ecklonia radiata in Southern Africa? Be the first to add your observation on iNaturalist!