International Day of Women and Girls in Science

Women and girls all over the world continue to be excluded from participating fully in science. On this International Day it is important to spread awareness to end discriminatory stereotypes, create equal access to education and establish more opportunities for career and skill progression.

I’ve asked the marine biologists at Cape RADD who their most inspirational female in Science is, and how are Cape RADD helping inspire the younger generation to get into marine science. Check out the interview below. 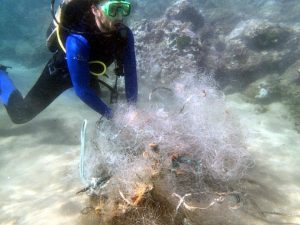 Special interests/Currently working on: My main interests lie in the field of inter-specific animal behaviour and I have been investigating the effect of Killer whale visual stimuli as a potential white shark deterrent.

Q: Tell me a bit about your background. How did you first get involved in marine biology?

A: I have always had an interest in the natural world and wildlife since I can remember, especially African wildlife. I studied Zoology and conservation at Bangor University before participating in a marine internship in South Africa where I fell in love with the ocean and the incredible megafauna that can be found here. After this I decided that the marine realm was where my passion and real interest lies. I was lucky enough to travel and live in Australia for a couple of years where I worked on the Great Barrier Reef and Ningaloo reef systems as an on board marine biologist, and dive master, for students and the public in an educational and basic reef surveyor capacity before heading back to South Africa where I would work as a field specialist biologist.  This was a great chance to spend a lot of time at sea and in the water learning about the white sharks and all the other interesting species that are found here. I soon had the opportunity to enrol at Pretoria University as a Masters Student, it was here I studied white shark hunting behaviour for my research subject.

Q: What inspired you to be a scientist?

A: I have always loved watching and observing animals and I was always inquisitive about what animals do and why they do it from a young age. I watched a lot of natural history documentaries and of course Sir David Attenborough’s TV shows were an incredible insight into all kinds of animals that are out there. As I got older I started looking into the people behind the documentaries and the jobs of the researchers and scientists that study the species.

Q: Which female scientist inspires you and why?

A: There are a couple of female scientists that inspire me, but I think my number one has to be Jane Goodall. I grew up watching her documentaries, I have a particular interest in Chimpanzees and find the similarities between the chimps and humans fascinating. Jane Goodall communicates her science in a very engaging and interesting style, she also lived on her own in the jungle of Tanzania for a very long time which I think is very cool and has created an amazing amount of awareness for great ape conservation.

Q: Are you seeing an increase in women and girls engaging in marine biology?

A: Yes, during my time as a field specialist where I took international science students out to collect data, I found that the majority of the participants were females looking to gain experience before wanting to go into a scientific profession. Also, on our citizen science program that we offer at Cape RADD we find that there are lots of young school girls who are very interested in the marine world and aspire to become marine scientists or dive professionals when they are older. It is great to see and we really enjoy giving them an opportunity to learn more about the ocean and hopefully inspire and encourage them to keep learning and diving so one day they will be the next generation of marine biologists.

Q: How do Cape RADD encourage women and girls to take part in their projects?

A: At Cape RADD it doesn’t matter what your gender, age, ethnicity, background, qualification, experience is, the only thing that matters is that you are passionate and enthusiastic about what you do and want to learn and share new skills and knowledge. We are a very welcoming team and like to make sure everyone feels comfortable. We are currently working on trying to engage local school children who might be interested in marine biology by offering them the chance to experience snorkeling and collecting data.

Q: Do you think there needs to be more done in South Africa to encourage girls to pursue a career in science?

A: I think currently there is still a bit of a difference between the ratio of males and females in scientific studies and roles in South Africa especially the top scientific positions. However, I think science like many other professions may historically have a male orientated stereotype as a line of work, but in the modern day this stereotype is fading quickly. I think all young people should have equal opportunity and be encouraged to follow their interests no matter what their gender is.

Q: What advice would you give to anyone wanting to pursue a career in marine biology?

A: My advice would be to try and get involved with as many events, talks, experiences, in your local area as you can. Visit aquariums, learn to dive, speak to people who are already pursuing this profession if you can and ask them questions! Be focused about what you study at school/college/university so you can find your favored area of interest and enrol in programs where you will gain new experiences and knowledge. 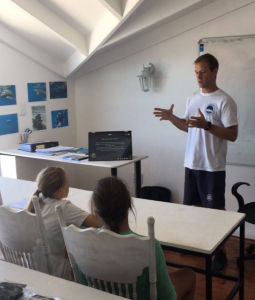 Q: Tell me a bit about your background. How did you first get involved in marine biology?

A: I sort of stumbled into discovering my interest in marine biology. Looking back, I can clearly see there was always an attraction to the ocean, but it wasn’t something I identified until much later. My parents always encouraged me to be studious so that I could have a successful and rewarding career that reflected my talents. Becoming a doctor was always the pinnacle career in my mind, so I set off at University to study pre-medicine. And I hated it. It wasn’t until after graduating that on a whim I travelled to South Africa and discovered that marine biology was my true passion. So…not sure what to do with your life? Travel to South Africa! That’s basically what the motto “Inspiring new ways” is saying, right?

Q: What inspired you to be a scientist?

A: I’ve always enjoyed the challenge of creating things and solving problems. In science you get to do both in many different ways. Research is basically this, you create tools that allow you to answer a question. These tools can be physical tools, or analytical tools. The questions can be simple, or solve large-scale problems. You’re an engineer, a mathematician, a writer, a salesman and an accountant all at once. I suppose it’s the perfect job for someone who doesn’t know what they want to do. But back to the point, the combination of creativity and logic (there’s no left or right brain here, it’s WHOLE brain) required of the many different tasks involved with science means you are always learning, and the satisfaction of having learned or created something new is always inspiring.

Q: Which female scientist inspires you and why?

A:Her royal deepness Sylvia Earle. Her list of achievements is astounding. I think she realised very quickly in her research that the ocean was on a human-led course for destruction and has since dedicated her life to making sure we do all we can to prevent this.

Q: Who were some of your mentors along the way? Were any of them female?

A: My background over the last almost 10 years has been in shark research, and the shark research community in South Africa is almost entirely female. I think while men are competing over their egos, women are actually getting things done and advancing science. I’ve always been inspired by the quality and amount of work put out by Alison Kock and Alison Towner.

Q: Do you think there needs to be more done in South Africa to encourage girls to pursue a career in science?

A: Always! if #MeToo has shown us anything it’s that we need to be doing more for our women all around the world. In South Africa the Department of Science and Technology has been recognising women since 2013 in their annual Women In Science Awards and also hosts other events each year during Women’s Month in August.

Q: How do you think Cape RADD encourage women and girls to take part in their projects?

A: Cape RADD does not discriminate! We encourage collaboration with any and everyone in all aspects of our research and programs. This is reflected in our dedication to Citizen Science. We don’t want our work to be exclusive to academics. Science is for everyone.

Q: What no.1 piece of advice would you give to anyone wanting to pursue a career in Marine Biology?

A: This isn’t limited to those just wanting to pursue a career in marine biology, but EVERYONE! I firmly believe I went to University too soon. The idea of a gap year isn’t a big thing in the States and I truly believe I would have benefited had I taken some time to first discover who I was. So piece of advice number one: don’t rush! You don’t live by anyone else’s timeline but your own. For the marine biology students? Marine science isn’t knowing a lot of facts about sharks or training dolphins. It’s about understanding the process that drive the ocean ecosystem. This means knowing a bit about oceanography, physics, chemistry, psychology, anthropology and so much more. So much in fact that it’s nearly impossible to quantify all the elements that influence ocean life and instead we use statistics and probability to summarize them. So piece of advice number two: don’t sleep through those 8 am stats lectures!