This blog also appeared on the University of Washington’s Marine Biology Student Spotlight on 15 October, 2018.

Hi everybody! I’m Amanda Gardiner, a junior here at UW pursuing a BS in Biochemistry and Biological Oceanography with minors in Marine Biology and Paleobiology, along with a BA in English – Creative Writing Emphasis. All of these academics mean that my summers are normally filled with classes. This past summer I discovered my new favorite classroom: Cape Town, South Africa! 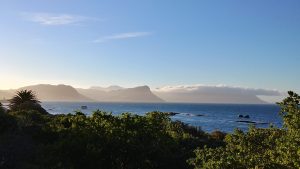 For the month of July I was a student in the Cape RADD Marine Biology Field Course, where I not only honed my diving skills but learned how to collect data underwater (easier said than done!), learned about the unique environment both above and below the water around South Africa, and how to use programs like R and QGIS to manipulate the data I collected.

I stayed in a flat in a tiny suburb of Cape Town called Glencairn, which was only 5 minutes from the dive center. We had a view of False Bay and on clear days you could see Seal Island (yes Shark Week fans, that Seal Island!). The first few days I was there we got a tour of the Cape Peninsula, and then had several classroom sessions to learn about the geography of the Cape, ocean current interactions between the Indian and Atlantic Oceans, the spreading of kelp into False Bay, and all the commonly found species of fish and invertebrates that we would encounter on the dives.

After our heads were filled with knowledge, it was time for us to dive! Our first dive was a refresher course and practicing some rescue techniques and then we spent the rest of the week practicing our buoyancy and learning how to take data underwater. Turns out quadrats and transects are a lot harder to lay down when you have swells carrying you 20+ feet every few seconds! 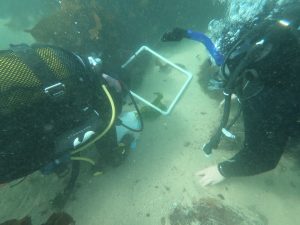 Our second week we started adding some variety into the routine. Now that we were comfortable diving and had been on a handful of data collection dives, we started to diversify in how we collected data. We spent a day on the water rather than in it with Yacht Boaz to deploy a BRUV (baited remote underwater video) and do a plastic trawl. After collecting the plastic, we sorted the it and sent it off to 5Gyres to be a part of their database and research into oceanic plastic pollution. I’ve always been an advocate for reducing plastic use, but even I was staggered at just how much microplastic we pulled from what looked like seemingly pristine water when we were sailing. 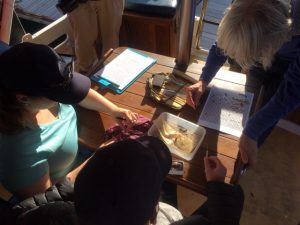 We continued diving and collecting data, along with starting in on freediving training. Turns out freediving has a lot more to it than just holding your breath! We started off with a  technique lecture, and then land training. We stretched, meditated, and practiced several techniques to get used to having that anoxic feeling in our lungs (and missed an African Penguin walking behind us because we were so focused on holding our breath!). 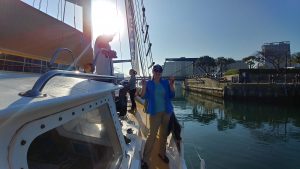 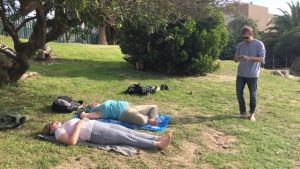 Now it was time to use our techniques in the water! We alternated SCUBA diving with freediving depending on the weather and water conditions. On freediving days we would do surface kelp quadrats to track their surface density, which could get so thick at some places you could sit on it and be held out of the water!

We honed our skills for the rest of our time in Cape Town, along with getting crash courses in how to use R and QGIS to analyze the data we collected. Thanks to it being winter down in Cape Town (Southern Hemisphere!), there were several days where we had to do data entry instead of get in the water. We took all the data we had collected on our dives and entered it into the Cape RADD biological diversity database so that it could be used for future research.

Along with our Cape RADD work, we got weekends off to explore Cape Town and we took full advantage of it! In four weekends we managed to squeeze in everything Cape Town could offer, from the aquarium and museums to summiting Table Mountain, ziplining, paragliding off of Lion’s Head, learning to surf, visiting the African Penguins at Boulders Beach, Sandboarding at the Atlantis Dunes, and my personal favorite, cage diving with Great White Sharks off of Seal Island in False Bay. 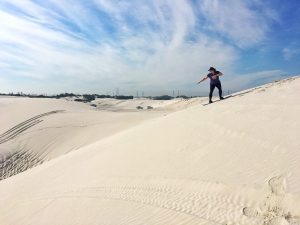 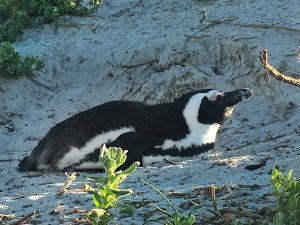 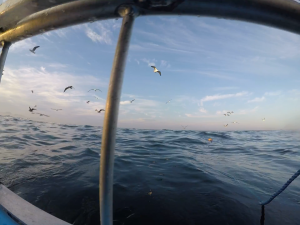 As much as I loved all the fun things we did while in Cape Town, what I miss most about it is the diving. Anybody who loves water, nature, SCUBA diving, or anything related, this is nirvana for a month. I had never been diving in kelp forests previously, and now I feel like I want to do nothing else. It was ethereal to see 30+ ft tall stalks of Sea Bamboo listing back and forth in the swell while you get carried soundlessly through the water, hearing only your breathing through the regulator and the crackling in your ears of an ocean filled with life. 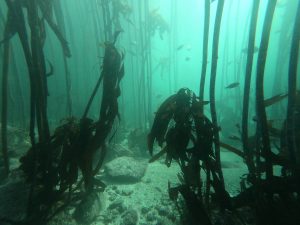 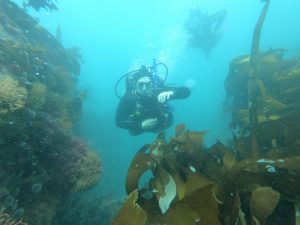 Several of our dive sites were frequented by Cape Fur Seals (which are actually sea lions!), and even after a month of seeing them I could never lose the awe I felt when they would soar through the water within touching distance. As much as I feel at home in the water, every time I saw them twist and play through the water I felt incredibly bulky and out of my element, realizing I could never compare to their sleek movements. 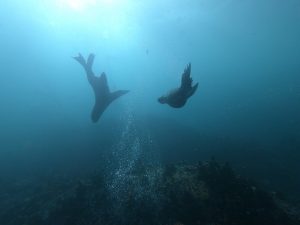 Now that I’m back in Seattle and preparing for autumn quarter I can’t help but try and figure out how to get back to Cape Town and glide amongst the kelp again. If you’re a diver or interested in getting certified in SCUBA, if you want to learn how to collect data underwater, if you just want to understand how you can do your part to help the planet, I would look at Cape RADD.

In a month I became confident not only in my diving skills and marine biology knowledge, but I found a sense of place in Cape Town. I feel as comfortable under the water, surrounded by Puffader Shy Sharks and Cape Urchins hiding amongst the Sea Bamboo, as I do walking around the UW Campus. That knowledge fundamentally shifted the way I think about the world and what I want to do with my career for the better, and who can complain about that when it happened by watching Great White Sharks and Seals on the opposite side of the planet? 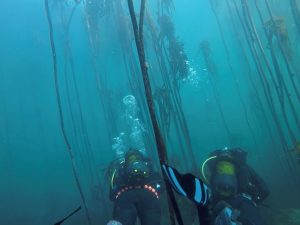