A research article published last month in the journal Science Advances details coral losses that are greater than previously imagined. These findings shed new light on the impact of human development on our oceans, a particularly hot topic today as documentaries like Netflix’s Chasing Coral reveal an all too grim story. Led by author Loren McClenachan at Colby College in Maine, the study reports an overall loss exceeding 50% of the area historically covered by coral reef in the Florida Keys, with losses of over 80% in some inshore areas. 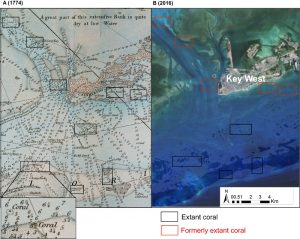 Most modern assessments of coral reef health are typically based on areas with existing coral reef coverage. This method can provide important information of present-day coral decline, but may overestimate long term losses. In this study, the authors sourced 18th century British nautical charts to assess coral declines over the last 240 years. The authors detail coral losses by overlaying modern satellite imagery with these historic charts to provide a more accurate representation of long-term decline.

In 1906 construction began on a railway linking the islands of the Keys, coinciding with abrupt changes in coral coverage during the early 20th century. This development, coupled with land-conversion and drainage of the Everglades, likely altered the surrounding ecosystem, creating the high inshore coral losses. Samples from the same time period show an increase in salt content and carbon levels, and a decrease in freshwater input; both culprits to coral decay.

Reef habitats are important sanctuaries for many marine species throughout the world. South Africa aims to protect 15% of it’s coastline by 2028 by proposing 22 new Marine Protected Areas (MPAs). These areas will help to protect and maintain the biodiversity of underwater resources by regulating and reducing the impact of human activities within them. Our research projects at Cape RADD aim to provide long-term monitoring of the diversity and abundance of life within some of these areas to ensure the health of our oceans into the future.